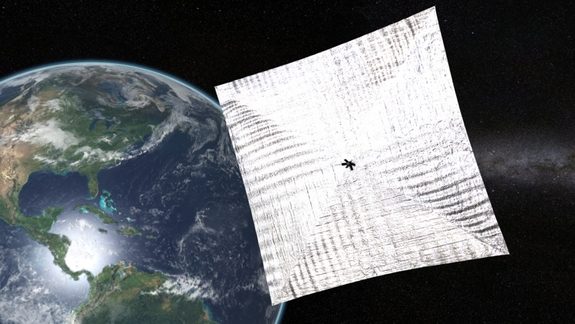 Saluting innovation at The Planetary Society for developing LightSail, a platform that may actually lead to interplanetary travel (cue the Star Trek music!) Coming in at the size of a box of tin foil, the LightSail launched into orbit last month to test out a physical phenomenon known as relativistic momentum. Functioning on the same principal as a Crookes Radiometer, light photons from the sun hit four Mylar panels with a thickness of 1/5000th of an inch thick, each about the size of a bedsheet. Every photon of light from the sun imparts an extremely small amount of push on the sails, and with every passing second the sail accelerates faster and faster.

If this experiment is successful, and the LightSail does show viability, a second launch is planned for 2016. The Space X Falcon Heavy rocket will take the LightSail to an altitude of 450 miles; high enough to actually attempt controlled sailing and navigation through near-Earth space. LightSail opens up the potential to sail far beyong the confines of Cable TV satellites.

If the technology behind LightSail is proven, scaling the platform up may allow man to sail far past the current long-distance phone call record. By increasing the size of the sail from four bedsheets to four hundred, and using a nuclear powered laser to provide the most efficient high-energy photon source, the heavens really are the limit of this transportation method. Assuming that the near-frictionless void of space would allow for the sail to increase speed constantly, travelling to Mars and far beyond may become a reality. The only question that I have for Bill Nye, CEO of The Planetary Society and all-around “Science Guy,” is how do we slow the LightSail down once we reach our destination? This answer and many more are sure to be coming soon.

Tommy is a Director in Kalypso's Industrial & Hi-Tech practice. He is based in Orange County, CA and enjoys the year-round sunshine and a good carne asada.