Prior to joining Kalypso, Trey was senior vice president of planning at POGO Jet, a development stage venture led by Robert Crandall, former CEO of American Airlines. At POGO, Trey led daily operations and business planning activities, as well as information technology. Prior to POGO, Trey spent over eight years at Deloitte Consulting, where he was a senior manager. At Deloitte, he was a leader in the advanced planning and scheduling practice, and led engagements for A&D, CPG, manufacturing, retail, and public sector clients.

Trey began his career in the United States Navy, where he flew F-14 Tomcats as a carrier aviator and served as a squadron operations officer and fighter tactics instructor.

Trey resides in Houston, Texas with his wife. 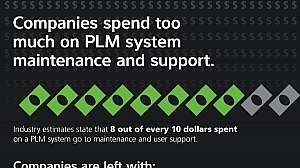 Infographic: Cost vs. Impact: Making the Case for Managed Services
Article: Now that Your PLM Implementation is Done, How Will You Sustain ROI?: Boost PLM Results with Managed Services
More Viewpoints by Trey Allen